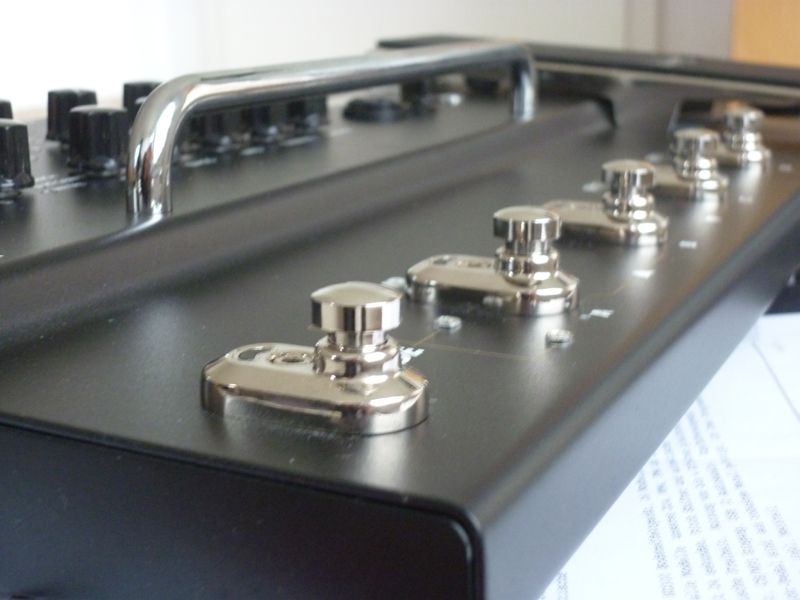 I think it is ok to say with confidence that the new generation of Line 6 HD amp modeling sounds amazing – and a lot better than their previous devices and most of what the competition is doing. That includes Roland/Boss’ own COSM technology.

A couple of months ago I bought a used Boss ME70 which is basically a multi effects COSM-powered device with a stompbox-mode and individual (separate!) controls for every parameter. That means that I can access, say, the distortion or chorus directly. I love that because I don’t think in “sound banks” as most other guitarists seem to do. I was happy with the unit, absolutely aware that it does not sound perfect. But it does its job as a tool and keeps me composing.

Then, by accident (I swear!), I bought a used POD HD300. It sounds amazing, absolutely fantastic. It also has a stompbox-mode and the amp modeling sounds a lot better. Not only can you chose your desired amp but also the cabinet, microphone and early reflections as well as sag, bias and hum – quite technical stuff that concerns the characteristic behaviour of old tube equipment. It even features a simulation of an ENGL amplifier which I totally love. But for several days this device made me so antsy that I had to sell it despite its clear superiority to my ME70. Why?

Because it kept me from making music and got me tangled up in an endless setup-loop. Do I use the XXL cabinet or the treadplate? The SM57 or the 421? Or the ribbon mic? They both sound great. Which one is better? To cut a long story short: The POD offers so many options that I suffered from what Barry Schwartz would call the paradox of choice: According to his theory, the greater the number of choices is in a certain situation, the more unhappy we will be with our choice afterwards. I think Barry is right. Instead of settling with what I got (as with the ME70) I was constantly fretting about whether I got the best sound.

The POD is a great device but it makes me play with sound instead of composing music. That’s why it had to go.